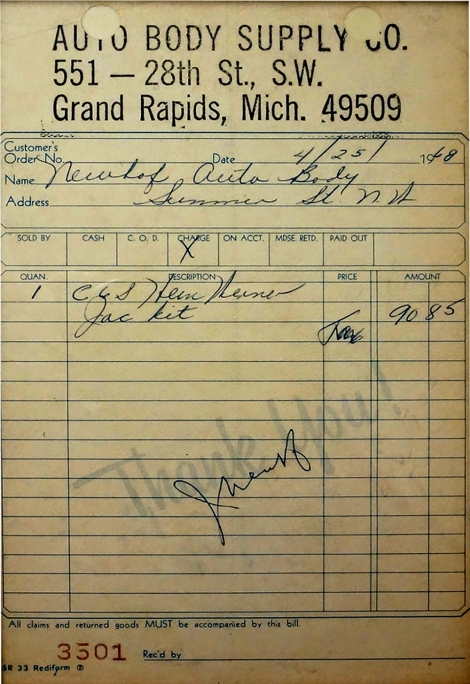 It all started in 1968, when a man named Jim White opened the first FinishMaster store in Grand Rapids, Michigan.

Jim understood that to grow his business he needed financing. So, in 1973 he sold to Maxco, Inc., but remained an instrumental part of FinishMaster.  His customer-focused vision drove expansion, and by 1990 the company had 15 stores in Michigan and Illinois.

The business continued to grow, and soon expanded into Wisconsin. In 1993 FinishMaster purchased Master Glass & Color, the largest distributor in Indianapolis, and confirmed its position as the distributor of choice in the Midwest. Shortly after, additional branch locations were opened in Ohio.

After establishing a Southwest region with the acquisition of branches in Texas, FinishMaster went public in 1995. There were 46 branches in operation at the time of the IPO. The funds from the IPO launched FinishMaster to a national scale with more acquisitions in the East and Southwest.

One year later, in July 1996, Lacy Diversified Industries, Ltd. (LDI) bought FinishMaster from Maxco. Just a few weeks prior, LDI also acquired Steego Auto Paint, a distributor based in Florida. These new partnerships vaulted FinishMaster into the leadership position in the automotive aftermarket, and increased its reach to 56 stores in 12 states.

At the time, FinishMaster’s largest competitor was Thompson PBE, a company founded in 1939 with operations based on the west coast. FinishMaster acquired this west coast competitor in May 1997, resulting in 143 branches in 22 states.

A Commitment to Exceptional Service

The FinishMaster headquarters moved to Indianapolis in March 1998 with a core focus on providing an exceptional experience to every customer and client. During the next several years, and still today, FinishMaster continues to grow and thrive because of our dedication to providing the ultimate customer experience, and the devotion of our team members.

FinishMaster has grown tremendously since our founding in 1968—from a single outlet to a team of more than 1,900 associates, with more than 210 locations across the country. We believe that our commitment to a singular vision and a set of core values has allowed us to attain this rapid expansion. We understand that any successful business starts with the people who work there, and we have the most experienced, knowledgeable and client-focused team in the nation.

Our passion for the industry is unmatched.