In Memory of Jim White - His Legacy Lives On 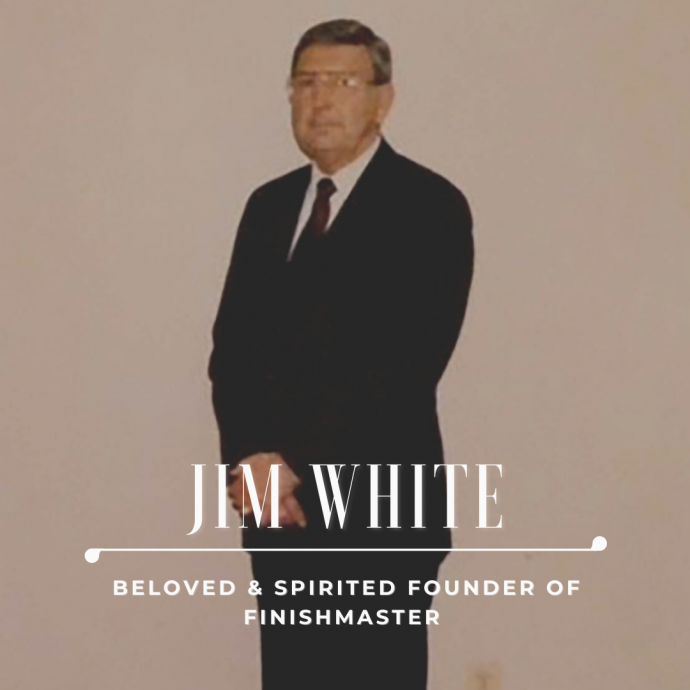 Today, with heartfelt sadness, we announce the loss of Jim White, beloved founder of FinishMaster.

“I’M PROUD OF THE FACT THAT WE DID FOR THE CUSTOMER WHAT WE TOLD THEM WE WOULD DO. FINISHMASTER HAS BEEN BUILT ON THE HONESTY OF HOW WE TREAT THE CUSTOMERS AND ALSO HOW WE TREAT OUR EMPLOYEES."
- FOUNDER, JIM WHITE

FinishMaster began on April 25, 1968, when Jim White completed the first transaction at the first branch in Grand Rapids, Michigan. A great deal can happen in 52 years, and without this one memorable and honorable man, all of it would not have been possible.

The phrase “You’re Always Right with Jim White” was coined in 1968 and the meaning behind that phrase lives on. Throughout the years, we have remained dedicated to providing the ultimate customer experience, committing to Jim’s dream, carrying out his legacy. It was not about one man being right, it was about a team living behind the commitment they made to each other, their customers, and their partners.

“Unfortunately, I never met Jim, but I had the pleasure to speak with his son, Ron. I know one thing for sure, we all have the privilege to work at FinishMaster because of his passion for the organization he built.” – Joseph McCorry, President & COO

Our team members look back on a man they admired and whom they were proud to work for, a man who showed them his vision and lived his dream, graciously inviting them to come along for the ride.

“Stand up individual, passionate about what he was doing and not afraid to tell you. Very personal, took the time to stop and chat with store employees… Great times at the Jim White annual golf outing, he loved his golf game.” – Mark Nagy, Operations Manager

“Jim White was a great man who was a true visionary. FM purchased our little Branch in Pontiac, Michigan in 1986 and although I didn’t know it at the time, that event would become the single best day of my career...In 1986 we were a huge company with 9 Branches! It sounds insignificant now but to Jim it was just a small step towards becoming the great company we are today. Jim lived a wonderful life and was always proud of the continued success of FM. The lessons that he taught are the foundation of our company, and me as an individual.” – Paul Jones, National Business, Regional VP

James F. White passed away August 26, 2020 after an extended battle with Parkinson’s disease and dementia. He met these challenges with the same determination he exhibited throughout his 101 years on this earth, including orphanhood, the Great Depression, and the European theater of World War II. He was a loving husband, father, grandfather, brother, and uncle. He had an abundant love for his wife, Vivian, two sons and extended family. His innate intelligence, love of a good challenge and overwhelming positive, resilient attitude served him well in life and his business career.

He graduated from Creston High School where he met the love of his life, Vivian Adkins, to whom he was married for over 73 years. When World War II began, Jim joined the US Army serving in the European theater with the 158th Field Artillery. He achieved the rank of First Sergeant and proudly served his country from Sept 9, 1942 to Dec 3, 1945.

In 1968, his entrepreneurial spirit led him and his wife to start Auto Body Supply Company, which would become the present day FinishMaster, Inc., where he had roles as President, board member and Chairman. The company has grown to over 180 locations in 33 states, 1200 team members and five distribution centers.

Jim was a member at Cascade Hills Country Club for over 30 years and enjoyed playing golf with his wife, family, and friends. He had two holes in one, won the President’s Cup, and won a member guest tournament with his son Ron.

Most of all, Jim will be remembered for his larger than life personality and “never give up, never give in” philosophy, which was an inspiration to his children, grandchildren, and co-workers.  He was a true representative of the greatest generation.

The family would like to thank the wonderful caregivers at Holland Home BEC and Faith Hospice for their kind and compassionate care. These are truly amazing people who make a difference every day.

The family has been served by Metcalf & Jonkhoff Funeral Service.